Yuletide season to all!

Make new memories and bring forth optimistic views in life. And have this book in your reading list. Thoughts of mine below!

Jack once saved August’s life…now can August save him?

August is a misfit with a pyro streak and Jack is a golden boy on the varsity rugby team―but their intense friendship goes way back. Jack begins to see increasingly vivid hallucinations that take the form of an elaborate fantasy kingdom creeping into the edges of the real world. With their parents’ unreliable behavior, August decides to help Jack the way he always has―on his own. He accepts the visions as reality, even when Jack leads them on a quest to fulfill a dark prophecy.

August and Jack alienate everyone around them as they struggle with their sanity, free falling into the surreal fantasy world that feels made for them. In the end, each one must choose his own truth.

Being of independent for certain things could be fine but not as always as it should be. People do need someone to share their burdens, troubles, and worries. It can be your friends, family, or loved ones. Though, I know for the fact that, even your close to can’t be of help you expect. Sometimes, it is best to consult for the experts. And that’s how this book will let you see and realize for yourselves. This is the best example of an excellent narrative where sometimes self-reliant don’t always end in a favorable outcome.

As what I observed, this issue is sort of usually neglected, since sometimes it was planted in our mindset that we can also solve the problems on our own terms without seeking advice from the rightful person (though this isn’t of comparison to all). Resulting in a bad situation. Which I do sometimes, I know, I’m not perfect, to say the least since I have my own flaws and faults but at least I also do ask for advice (nothing serious by the way). But in this book, August Bateman is such a bold and brave individual who is a good confidante and son. Always there for Jack Rossi who introduced him to another world, he believes exist as Jack thinks it is.

What August did is such an act of courage since he just wanted the best he thinks for Jack when he knows what really is the best. You can hate him for what he did but you can give the love he deserves for only caring for someone. How complex their relationship is and confusing at the same time, I know you’ll be a meld between the reality and the world they will be. Questioning who’s who is the real one at the end.

This book explores mental issues that shouldn’t be neglected at first. Reminding us of how we should handle the matter and be aware of how this will be affecting others. I know, I’m not an expert talking about this that’s why there is someone who is the best to speak to with regards to this sensitive topic. All I can advise as for this issue, never dwell too much of negativity and always talk out of the problem to someone you trust or even the one that can really help you out of it.

As you read The Wicker King, you will be fascinated by its contents, how its pages turning darker and darker as the story draws near to its conclusion. Extraordinary styles and arts. Brilliantly composed. This is my best read of this year. Definitely going to reread it next year. Highly recommended for your soul and mind. 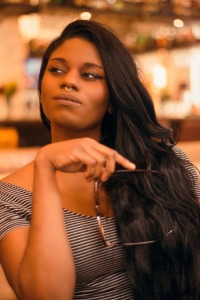 K. Ancrum grew up in Chicago Illinois. She attended Dominican University to study Fashion Merchandising but was lured into getting an English degree after spending too many nights experimenting with hard literary criticism and hanging out with unsavory types, like poetry students. Currently, she lives in Andersonville and writes books at work when no one is looking. 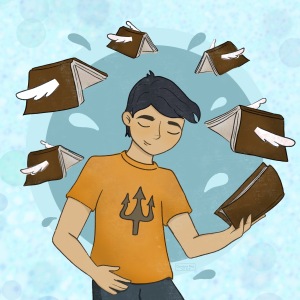